Ask any veggie gardener what their favorite crop to grow is and you are likely to get tomatoes. 85% of the estimated 29 million gardeners grow tomatoes (NCG). Flavor is compromised, as well as variety, when you rely on store-bought, commercially grown tomatoes. They are also expensive, so it makes sense to grow your own. Here’s how to grow tomatoes!

There is a staggering amount of diversity in the tomato world. They are divided by many attributes:

Although it’s heavily debated, the standard definition of an heirloom variety, for any plant species, is that it is a cultivar that has been grown for many generations, the seeds passed down from gardener to gardener through the years. For a variety to be an heirloom it must be open-pollinated – or else there would be no viable seed to save. However, some schools of thought add an age requirement – such as, it’s been around for at least 45 years. The benefit of heirloom varieties is that over time, through selective breeding, the plant adapts to the regional climate and soil that they have been grown in; this leads to the plant being resistant to local temperature extremes and even pests that are common to that region. Heirloom varieties are not commonly used in commercial agriculture due to their inconsistent fruit shapes and production. They are also more easily damaged by mechanical picking machines, and don’t keep or store well. Varieties that are used in commercial agriculture are hybrids that have been developed for high production, disease-resistance, storage-length, herbicide-resistance, and transport. These hybridized varieties are not-necessarily evil, but the practices aren’t sustainable (monoculture, herbicide use, trucking produce for long distances). But the biggest problem with commercially grown produce, in my opinion, is that it doesn’t taste as good, since they are not selecting for taste as much as the other traits, and because commercial growers have to pick them so early in order to transport them. So, in general, I prefer to purchase produce that has been grown in my area from the local Farmer’s Markets. Even some of our local grocery stores are now carrying produce from small local farmers. I am fortunate to live very close to the area that grows most of the produce for the western United States, and sometimes the entire US. As for what I choose to grow in my own garden, I grow mostly heirlooms, because there is way more variety to choose from and they are very tasty, but I also grow a few hybrids, if they are unique or interesting.

There are hybrids that are bred for disease resistance, so this leads to further categorization. On the plant label, if you see one of the following abbreviations, the plant is resistant, or more tolerant of, the disease from the list below. Some heirloom tomatoes carry a natural resistance to a disease; these are the plants they start from when selecting for that disease-resistance.

Since tomatoes are from tropical & semi-tropical climates, areas with dry seasons commonly experience issues like powdery mildew and lack of production due to lack of pollination

Timing: When to Start Tomato Seeds

not possible because of root system

if it’s hot in your area, shading is necessary to prevent tomatoes from getting sunscald. This happens when the fruit gets warmed to 100°F. Shade provided by good leaf cover is good enough: just make sure that tomatoes in the “mature green” stage (at about 80% of their final size) and “breaker” stage (starting to change color at the blossom end) have good leaf cover

Just the fruit is edible on tomatoes, but they can be eaten at any stage of ripeness. Green tomatoes will ripen in storage, too, but they taste best when left on the vine till ripe & ready.

All other parts of the plant are poisonous, as with all of the nightshades. 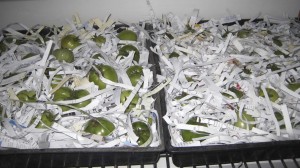 Time and energy intensive (not to mention HOT work in the warmest days of summer), but results in the best texture and longest lasting. Also requires special equipment.

Tomatoes need to be peeled by blanching after washing, coring, and trimming. To learn how to can, pick up a copy of the age-old standard Ball Blue Book guide to canning at any hardware store, or any store that sells canning supplies. This is the standard that all refer to. Tomatoes can be canned whole, diced or pureed.

In my opinion, freezing is the easiest method of preserving tomatoes. They definitely need to be cooked or blended, since the freezing turns their flesh mushy, but there’s no need for blanching & peeling. 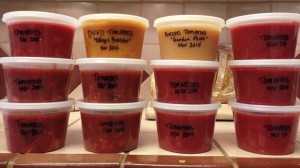 Pureed and diced tomatoes ready for the freezer 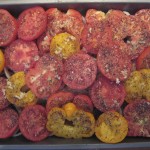 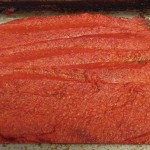 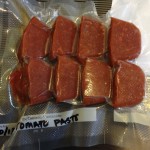 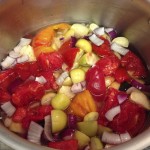 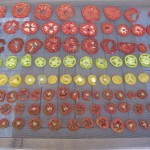 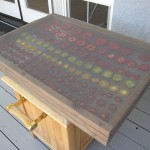 Screens to keep insects out

This is my second-favorite method of preserving tomatoes. Especially because of the price of store-bought sun-dried tomatoes, and because of how little space they take up when storing.

One final method of preserving tomatoes is the age-old art of pickling. I have pickled cherry tomatoes, to some success, although I think they absorbed way too much vinegar…so I will have to work on that. There are also lots of recipes for pickling green tomatoes – that might be what I try next year with the abundance of green tomatoes I have every November.

Planting Out Too Early -or- Neglecting to Up-pot?

2 thoughts on “How to Grow Tomatoes”