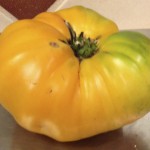 Sources: (where to buy)

Results from My Garden: