Leafhoppers seem to be the bain of my existence…well, not really – but they sure complicate my veggie gardening. They would only be mildly annoying, if it weren’t for the diseases they spread.

very small insects, ranging from 1/12 – 1/8 inches long (2-3 mm). They are wedge-shaped, with narrow bodies that are broadest at the head and taper to the rear. They look a lot like a very very tiny cricket, and are related to the cicadas. They are colored light green, pale yellow, or brown. Some have bright bands of color on the wings. Nymphs are often white. The aster, or 6-spotted, leafhopper has 6 pairs of black spots on the front of the head. Click here to see images from Google.

They live mostly on the underside of leaves, sucking sap from the plant, leaving stippling or mottling on the top-side of the leaf. Most species feed on the phloem of plants, removing only small amounts of sap, while excreting some honeydew. Several leafhoppers just eat the upper cell layers of the leaf (mesophyll, parenchyma), where they leave white flecking wounds. These leafhoppers often excrete dark spots like lace bugs and some thrips or plant bugs. Empoasca genus leafhoppers can injure the vascular system, which results in hopperburn. This is what killed my potatoes, I think. There are also some leafhoppers that are known as “sharpshooters”because they flick small droplets during excretion, which is seen as a fine spray. Besides this damage to plants, their biggest offense is the transmission of disease: both viruses (curly top), phytoplasmas (aster yellows, ash yellows), and bacteria (bacterial leaf scorch, Pierce’s disease of grape). See below for a list of the different symptoms of having leafhoppers; also, see below for info on these diseases.

They are very quick and jump off the plant as soon as you get near or rustle the plant. The nymphs are wingless, though, and therefore crawl in a crab-like manner. They are often seen running sideways or hopping. Rustle a plant and if you see a bunch of very small insects jump off and fly to a neighboring plant, then you pretty much know you’ve got ’em.

They lay their eggs as small groups in leaves and stems, under the surface, usually in veins or small twigs. They will hatch in 10-14 days. The nymphs take several weeks to develop. They can fit in 2-5 generations per year and can overwinter as either adults or eggs, but not nymphs.

There are more than 2500 species of leafhoppers in North America. My potatoes, parsley, brassicas, and squash leaves, along with dahlias and other ornamentals, and strawberries were fiercely attacked last summer by these pesky little buggers. The books all state that significant plant injury is rare, but they ravaged my garden. Potatoes were completely sacked, and the dahlias looked sad. The injuries on the dahlias looked a lot like spider mite damage, but there were no spider mites & tons of leafhoppers. Maybe it was just a really bad year for leafhoppers…or wait, a good year for leafhoppers, a bad year for the gardener!

Homoptera includes aphids, psyllids, whiteflies, scales, cicadas, leafhoppers, and others. They undergo a simple metamorphosis. Most families have immature stages which roughly resemble the adult form, except the absence of wings; however, some have unusual forms. The nymph stage of leafhoppers have no wings and look exactly the same as the adult. 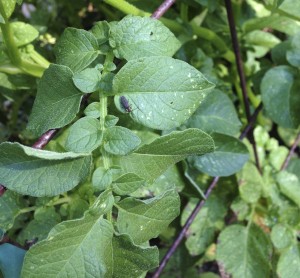 How to Calculate Chill Hours for Your Area