This season’s crop of tomatoes is not looking quite as vigorous and healthy as last year’s crop – why?

Here’s what they looked like last year, in June of 2010, a little over one month after planting out: 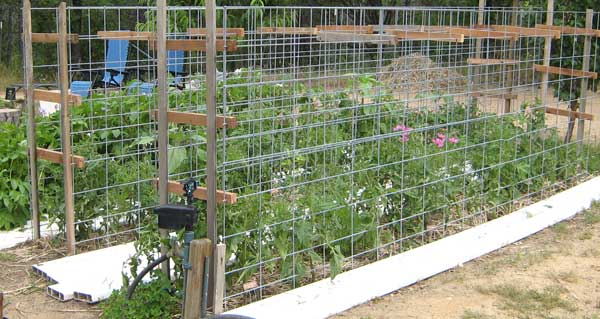 So what was different between the two crops?

Cool temperatures are known to stunt tomato plants, when they are just developing; since the 2011 tomatoes were treated to almost 3 weeks of temperatures below 54 degrees, this seems the most likely culprit.

Since I still want the tomatoes in the ground in April, I will need to use wall-o-waters or plastic mulch to warm the ground.

After pulling out 2012 crops from the bed that the 2011 tomatoes were planted, we found that the entire bed was heavily infiltrated with roots from our neighboring pine trees. Although these pine trees are probably 60 feet away, they were thirsty and found our lush, irrigated garden soil. We double-dug the entire bed, cutting out the roots with the shovel head. It was hard work – and work that will need to be done probably every year, or maybe every other year.

I still think the cool temperatures played a big role, but the top of the bed, where the pine roots were at their worst, performed even less well than the lower tomato plants.

How to Grow Tomatoes