Fusarium is a soil-borne fungus that can survive for a decade or more in dormant stages. It enters the plant through roots and invades its water distribution network, where the fungi partially or completely block the vascular tissues, usually by gum-like formations, causing wilting and eventually death of the plant.

Other Diseases Caused by Fusarium Species

When cutting off diseased branches or stems, cut the stem at an angle. If the disease is present, there will be a dark layer in the vascular parts of the cross-section. 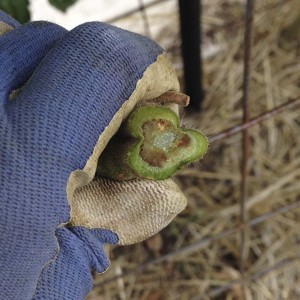 Avoid introducing the pathogen to clean fields, since it survives indefinitely in the soil.