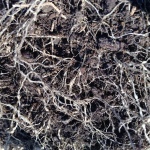 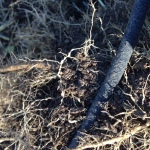 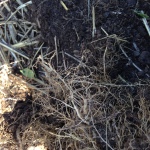 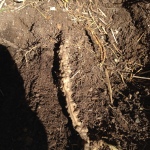 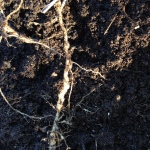 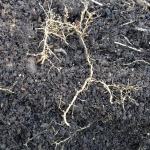 Ambiguous symptoms like wilting and failure to thrive are the most common symptoms of a root-knot nematode infestation. The only way to determine if this is the problem is to inspect the roots for galls or nodes.

Plant-feeding nematodes go through 6 stages—an egg stage, 4 immature stages, and an adult stage. Many species can develop from egg to egg-laying adult in as little as 21 to 28 days during warm summer months.

Eggs survive in the soil from season to season. After the eggs hatch, the second-stage juveniles invade roots, usually at root tips, causing some of the root cells to enlarge where the nematodes feed and develop. The male nematodes eventually leave the roots, but the females remain embedded, laying their eggs into a jellylike mass that extends through the root surface and into the soil.

Distributed worldwide; most common in areas of mild winters

Dig up a plant showing the symptoms and examine the roots for galls. If they cannot be rubbed off, then you’ve got root knot nematodes. If they are small, and can be rubbed off, and it’s a legume, then these are beneficial galls from nitrogen-fixing bacteria.

A simple test can be done to determine if your soil has root knot nematodes: sow some melon seeds in moist soil taken from your suspected garden bed. Keep the pots at about 80 deg F, and in about 3 weeks examine the roots for nodules. If there are nodules, then see treatment plans below, or plant resistant plants or cultivars.

Nematodes are difficult to control and spread easily from one area to another by moving soil, plants, or from garden tools. On their own, Nematodes migrate through the soil at a rate of 3′ per year, less in heavier, clay soils.

Buying certified, disease-free seed and seed stock, as well as seedlings, is the main way of preventing root knot nematodes from getting into your soil. Also, make sure to get reviews and recommendations before buying compost and soil.

While only effective in the top 12″ of soil, solarizing the soil will allow you to grow shallow-rooted annual crops, or start young woody plants which can get established before the nematodes get get to damaging populations. However, this isn’t a good option for perennial crops such as fruit trees, vines, and woody ornamental plants.

Fallowing for 1 year will decrease nematode populations enough to successfully grow a susceptible annual crop. Two years is even better. Make sure to keep irrigating the bed, though, so nematode eggs hatch, and you have to make sure to control the weeds that nematodes eat. The idea is to starve them so they can’t survive or reproduce.  If you get nematode damage the next time you plant a susceptible crop, you will need to repeat fallowing, since they only need a single season to get up to damaging numbers.