Powdery mildew is a common fungal disease that effects many types of plants, and is fairly easy to manage. It causes poor growth and lower yields, but seldom kills the plant. There are many different species of powdery mildew that cause the disease on many different species of plants. See list of species and their hosts below in “Plants Affected”. Unlike many other fungal pathogens, it is able to flourish under warm, dry conditions, when competition (other fungi and bacteria) are not doing well, and doesn’t require wet conditions to germinate. 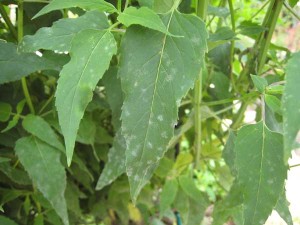 The white, powdery growth that you see on the leaf surface that starts in small, round spots, and can eventually spread to cover the leaf surface, stem and flower buds. Flower buds will fail to open. The powdery white coating you see is actually thin layers of mycelium that produce spores. The spores make up the bulk of the white stuff you see. The spores can be seen with a microscope or hand lens as chains of clear, white balls.

The powdery mildew fungi requires living plant tissue on which to grow; as it is a parasitic fungi. Perennial plants allow it to survive through the winter and then infect the annual plants and vegetables. It also survives the winter on weeds. Some species of the fungi produce special spores that remain viable until winter is over. These powdery mildew species are the ones that infect peas, lettuce, parsley, cucumbers, etc. Areas where there is no real frost have an especially hard time with powdery mildew.

A spore of powdery mildew, dispersed by the wind or carried by an insect, lands on a leaf. The spore germinates then grows mycelium. The mycelium of the fungi then grows in a thin layer on the surface of the leaf, shoot, or flower. The mycelium then produces chains spores which are dispersed by wind to new hosts.

All powdery mildew, to different extents, will germinate without water. Free moisture (water droplets, water sprays, rain) actually kills spores and stops mycelial growth. Moderate temperatures (60-80 deg F) and part shade are perfect for an explosion of powdery mildew, since the mycelium and spores are both sensitive to extreme heat and direct sunlight; however, powdery mildew is one of my biggest issues in my garden, which is normally 90 – 110 degrees in the summer (with very low humidity) and full of blazing sunlight.

Powdery mildew is found everywhere in the United States and Canada.

The white or light-colored, powdery growth on the leaf surface is pretty indicative of powdery mildew. It’s harder to identify on tomatoes, eggplants, peppers, and artichokes, since it just shows as yellow patches. These yellow patches are often confused with other problems, like nutritional deficiencies or other fungal diseases.

Not in any particular order: